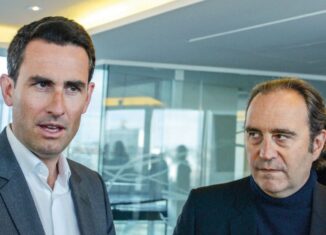 Turnover and subscriber recruitment on the rise, profit on the rise Olivier Roussat, CEO of Bouygues Telecom, can smile broadly. The turnaround strategy implemented in 2013, one year after the arrival of Free Mobile, continued to bear fruit in the first quarter of this year. Beyond even all hope. Because his happiness would probably not have been total without the publication of the very disappointing results of Iliad (Free). For the first time, Xavier Niel’s group has lost in three months fixed subscribers, its historical profession, while the pace of recruitment in mobile is slowing down.

In the two days following the publication of these results, on May 15, the operator’s share price fell by more than 20%. “They made the big mistake of believing that Bouygues Telecom was going to die”, comments a competitor. After the failure of the attempted merger with Orange in 2016, nobody gave the skin of the subsidiary of the construction giant very dear. “We have never underestimated our adversaries”, replies Thomas Reynaud, the former financial director of Iliad, appointed general manager of the group in favor of a vast reorganization of the staff. He replaced Maxime Lombardini, who had held the position since 2007 and became Chairman of the Board of Directors.

Xavier Niel’s teams were surprised. First, therefore, by Bouygues Telecom which has chained promotions on its fixed offers. Martin Bouygues had promised to focus on this sensitive point, where Free generates most of its cash, supposed to fuel its investments in mobile and very high speed fixed. “Customers are sensitive to fixed prices”, explains Olivier Roussat, to justify his promotions. A strategy that he slightly changed at the start of the year. ” In fiber, we are present at each opening by Orange in moderately dense areas ”, he argues. Of course, he continues to favor volumes, but value also interests him. And the group eased off on the “promos” a bit in the first quarter. “We left after everyone else, but we have caught up, and today we are shaking the market”, skillfully sums up the CEO.

But Bouygues Telecom is not solely responsible for the woes of Free. “Like a nuclear aircraft carrier, Orange continues to charge, regardless of the size of the waves”, deplores an industry leader. The incumbent operator surprised everyone by accelerating in all directions in the deployment of fiber. “We have announced our plans from the start, if you don’t invest, you aren’t present”, retorts the Secretary General of Orange, Nicolas Guérin, in response to criticism from Free and Bouygues Telecom who accuse him of rebuilding a monopoly in optical fiber. In fact, Orange’s very high-speed broadband offensive directly affected “The safe of Free”, as one rival puts it: very dense areas, city centers. And to top it off, the “telecoms troublemaker” has also been overwhelmed by mobile by SFR with its offers at broken prices: 5 euros for 30 GB for life. The result was not long in coming. In the first quarter of 2018, the operator finally gained subscribers: 71,000 in landline and 239,000 in mobile. After a catastrophic end of 2017, marked by the departure of a large part of its staff, SFR is showing signs of a recovery. The severe cure imposed over the past six months by Armando Pereira, co-founder of Altice and partner of Patrick Drahi, seems to have borne fruit.

“We were slightly late in adapting our commercial policy in the face of systematic promotions from our competitors, recognizes Thomas Reynaud, the new CEO of Iliad. We are now in a transition phase, at the start of a new growth cycle with Italy, a new box, new offers and innovations. The fundamentals are solid and we have no worries about our strategy. “

But he could have to work on an additional file soon. Because, in recent months, the small world of telecoms has again been buzzing with discussions with a view to possible consolidation. No formal negotiations are engaged, but the four bosses of the sector meet regularly and the owner of Altice, Patrick Drahi, is each time questioned about his intentions. Recurring rumors evoke its possible withdrawal from the French market to concentrate on the United States, which is more profitable. His answer is always the same: he is not a seller, unless the transaction allows him to take a stake in Orange … The maneuver seems difficult to carry out but, in The world, Sébastien Soriano, the boss of Arcep, the regulatory authority, has sent encouraging signals. He would look favorably on a merger project if it were “Creator of value for the country, and not just for the shareholders”.

The official kickoff of a new liar poker game between the four players. “We are ignoring the idea of ​​consolidation and we are continuing to invest heavily”, affirms Thomas Reynaud while we lend appetite to Bouygues for SFR. Orange could once again find itself at the center of consolidation if the State decides to sell its stake of nearly 23%. “The more time passes, the less we need consolidation, which is not the case with SFR and Bouygues”, tempers Nicolas Guérin. And on the Bouygues side, the major maneuvers have already started: “All the hypotheses are currently being studied with them: purchase, sale or partnership”, says a competitor.

These “Hackers” Who Got Their Hands On Billions Of Passwords